Optimistic investors spent Thursday driving up the price of shares in Uber (NYSE: UBER) in anticipation of the company’s 2Q earnings. Once the results arrived, though, it was a very different story.

Uber reported an eye-watering 2Q loss of $5.2 billion on Thursday, part of an earnings report that came almost three months to the day after the ridehailing company went public in a long-awaited IPO that raised $8.1 billion. The report sent the company’s stock sliding in after-hours trading, giving up most of its gains from earlier in the day. Uber closed Thursday at $42.97, up more than 8%, but it dipped to below $38 in early after-hours trading before quickly bouncing back to above $40.

That $5.2 billion loss included $3.9 billion in one-time compensation expenses related to the company’s IPO, so the damage isn’t as severe as it might initially appear. But that leaves about $1.3 billion in other losses, compared to $878 million in total losses for 2Q 2018.

Uber also reported revenue of nearly $3.2 billion, a YoY uptick of 14%. That’s reportedly the slowest quarterly growth figure the company has ever publicly disclosed, which is both a testament to how explosive its previous growth has been and a potential warning sign to investors of Uber’s ability (or lack thereof) to maintain that steady expansion.

Uber unveiled its 2Q earnings one day after Lyft (NASDAQ: LYFT) did the same. The numbers were a bit more promising for the slightly smaller ridehailing company, with revenue of $867.3 million (up 72% YoY) and a net loss of $644.2 million, compared to $178.9 million during 2Q 2018. Notably, Lyft changed its previous estimates of how much money it will lose for the whole of 2019, revising its projection from nearly $1.18 billion down to $875 million.

There’s a new unicorn in town.

“We believe that there’s a huge opportunity to transform the world’s 1.5 billion cars into cars that can generate earnings for their owners while they aren’t using them,” Turo CEO Andre Haddad told Yahoo Finance’s YFi PM in a recent interview.

Capitalizing on the growing car-sharing marketplace, Turo now hosts over 10 million customers worldwide. Customers can rent cars online or through the app.

So how does it work? “Turo enables all of these car owners around the country, around the world, to monetize their cars when they’re not using them,” Haddad explained.

The CEO sees it as a platform that’s more than just helpful for consumers, but also for the car owners themselves — giving them a modest income stream. “Last year, the average host on the platform earned around $550 a month sharing their car roughly ten days a month,” he told Yahoo Finance.

“A lot of people are sharing their main cars. Often it helps them pay for their car payments,” he added.

The car-sharing company operates in 49 states and 5,500 cities—except New York, as these rentals can’t be insured.

Haddad also stated that, when lending out your vehicle on Turo in the United States, the company provides insurance for the host through its partnership with Liberty Mutual.

“We provide the coverage that protects both the host and the guests,” the CEO said. “Your personal insurance when you’re sharing your car is not really covering that transaction,” he adds.

Whether Turo will follow in the footsteps of ride-hailing companies like Uber (UBER) and Lyft (LYFT) and go public however, remains to be seen.

It would have been bad enough for Uber if the company’s long-awaited IPO occurred during the same week that US-China trade tensions roiled the stock markets. Or if the offering came just a few days after rival Lyft posted eyebrow-raising losses in its first quarter as a public company. Or if Uber’s drivers planned a strike in the lead-up to the listing in protest of Uber’s pay practices.

Instead, all three things happened. And now, Uber is planning to price its IPO at or below its midpoint price of $47 per share, per reports, which would give the company a fully diluted valuation of $86 billion or less. That’s likely up from the $76 billion valuation Uber reportedly attained with its last round of private funding, but several billion shy of figures that have been thrown around in recent months.

It’s been a little less than two weeks since Uber announced an IPO price range of $44 to $50 per share, equating to a valuation range of about $80.5 billion to $91.5 billion. Earlier this week, Bloomberg reported that the listing was at least three times oversubscribed, enough to price at the upper end of its range if so desired—healthy demand, to be sure, but quite different from a Lyft IPO in late March that was reportedly 20 times oversubscribed.

The fate of Lyft in the intervening weeks is surely one reason Uber’s offering isn’t looking quite so gargantuan as once expected—although it will still be one of the largest VC-backed listings of all time. Since stock in Lyft closed its first day of trading at more than $78 per share March 29, the price of those shares has fallen more than 30%, dipping below $53 Wednesday to reach a new all-time low. The company now has a market cap of $15.1 billion, the same as the valuation that came with its final round of private VC funding last summer.

A single-day drop Wednesday of nearly 11% came a day after Lyft reported its financial results for the first time as a public company, including a net loss for 1Q of more than $1.1 billion. While the company chalked up some of those losses to IPO-related expenses, it’s also a reminder to investors that profitability is still very far away. Lyft lost $911 million for the whole of 2018, compared with a $1.8 billion loss for Uber.

Those losses are, of course, at odds with Lyft and Uber’s sky-high valuations and revenue figures, a quasi-contradiction that could be interpreted a number of ways. As an example, one can look to the ridehailing companies’ ongoing labor dispute with their drivers, which on Wednesday took the form of a boycott by Uber and Lyft drivers in cities across the US, the UK and Australia. Those drivers—who are, of course, regarded as contractors, not employees—see all that money flowing in and wonder why they, the people who actually allow Uber and Lyft’s apps to function, can’t get a little bit more of it. The companies, meanwhile, can point to the losses as a reason thriftiness is required.

And depending on the IPO price Uber ultimately settles on, by the end of the week, there might be a little bit less wealth to go around than everyone expected a few months ago. 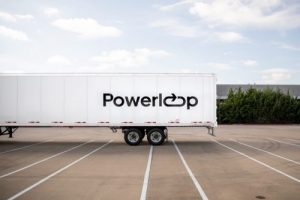 Elon Musk introduced us to the hyperloop. Now, thanks to Uber, we have a Powerloop, too.

That’s the name of the new service the ridehailing company unveiled Wednesday, which will involve renting pre-loaded trailers to shipping carriers in an effort to help smaller carriers connect to businesses with plenty of goods to move—including Anheuser-Busch, which is one of Powerloop’s first clients. Powerloop will be affiliated with the existing Uber Freight unit, which uses an app to direct truckers with empty trailers to cargo waiting to be hauled.

The announcement came a day after reports emerged indicating that Uber has been in discussions with investment banks regarding a public debut that could be worth up to $120 billion. The San Francisco-based company and its primary rival, Lyft, are both making progress toward enormous IPOs that are expected in 2019.

Uber isn’t the only VC-backed company with its eye on reshaping the world of shipping. Last month, Convoy confirmed it had raised $185 million at a $1.1 billion valuation, essentially tripling its valuation from barely a year prior, while Cargomatic brought in $35 million in August. Both companies have similar aims to Uber Freight, using a platform to connect available trucks to clients with goods to ship.

Powerloop’s trailer-pool services are already available in Texas, with plans to expand throughout the US. The division represents Uber’s latest effort to diversify away from its flagship ridehailing business. That unit, the company’s Freight division and its UberEats subsidiary are all currently unprofitable, per The Wall Street Journal, with UberEats expected to be the first of the units to get into the black.

SAN FRANCISCO—Before Dara Khosrowshahi became CEO of Uber a year ago, the ridehailing company was in the process of cleaning up its image after a rough year—and bringing on the former Expedia chief as its leader was a big part of its strategy.

Now, almost exactly a year has passed since Khosrowshahi was installed in the CEO seat—enough time that he’s no longer referred to as Uber’s “new CEO” or “Travis Kalanick’s replacement.” Khosrowshahi took the stage at TechCrunch Disrupt 2018 to discuss how Uber has evolved since he took on the big job last September, from major personnel changes to a move into scooters to a renewed focus on diversity.

“I had no frickin’ clue what I was getting into,” Khosrowshahi said of his decision to take on the top job, adding that overall he feels positive about the progress the company has made. “It’s been a year. So far, so good.”